Inspired to Paint the Sea

What inspires me to paint the sea is that it is a beautiful and ever changing subject which has endless possibilities.
Before I moved to the beachside residence where I now live I began painting tropical seascapes in a semi abstract way. I am sure that in my subconscious mind I have beaches and the edge of the sea and palm trees engrained, as I was brought up as a toddler on silver sandy beaches of East Africa.
When I was selling in London, the ever-popular prints of John Miller were taking over the galleries countrywide and that influenced my semi-abstract tropical beaches. Also it was a complete breakaway from portraits, architectural London scenes and commissions of popular places that I was previously painting.
The flat areas of colour simplified down to blue and white meant that the design and composition became paramount.

The Beautiful Colours of the Sea

Since living here and walking daily on the beach my present style of seascapes has developed. The beautiful colours which change everyday according to the light, weather, tides, winds, time of year and time of day are an endless source of fascination. I prefer to paint just water and sand with a bit of headland (natural trees and foliage) but the brightly coloured sails and the graceful yachts tackling the wind are beautiful especially when the sun and shadows plays across the taut sails.
This year the design and pattern of the beach pools, rocks, seaweed and meandering wet outlets of water on the sands are what seems to be my fascination. The shapes create space and distance and I try and use the shapes in the sky to compliment the designs on the sands. I like to create therapeutic relaxing stress relieving paintings.
One customer kindly wrote to me and said that my paintings were peaceful to the soul.
My latest painting is getting close to the effect I am trying to achieve. See “Solent View” and “Far “Out Triptych” …..The way the colours are lit up by a ray of sun and the gaps in the clouds.
The sea is alive with colour caused by the currents and rocks beneath, the clouds above, and the winds churning up waves or little ripple. It always looks different.

Artists that Influence my Paintings

Having studied history of art at college, of course, Turner is the greatest seascape painter. The Japanese prints changed the nature of composition from then onwards, notably the Hokusai wave which has influenced so many seascapes ever since.
However I do not consciously think of other artist’s style but my own has evolved just from doing so many paintings. It is not until I finish a painting and look at it and the previous ones that I see a similar style emerging. This just happens it is not contrived at all.
There are some contemporary artists from Scotland who do some fabulous beach seascape painting of the Islands remote rugged scenery in a broad colourful style.

Painting from Memory & Using the IPAD as a Starting Point

I tend to paint from memory of a local beach that I suddenly see in a different light while walking and now that I have mastered painting on the Ipad I quickly paint it from memory as soon as I get back and later it develops into a finished painting. I saw how David Hockney used this for sketching and thought, “I must learn to do that too”
So since last Xmas I have found that this helps steer away from too representational a painting as there are so many artists painting popular recognisable places but I like to create something unique which could be a beach anywhere. A new DSLR camera takes fantastic photos but I still find that my paintings need to be more from memory and sketches to develop something unique so I use the camera for photographing the finished paintings rather than for subject matter, apart from details of rigging and sails, but mostly I paint these mainly from memory.
Further round the Island the beaches are more rugged and larger expanses of sand and bigger waves crashing so these sometimes inspire me.

The Process of Painting Seascapes

When painting I first decide which blues and browns I am going to use and lay in the areas of colour and the design and composition. I then further develop all the pattern shapes and light and finally sometimes use glazes and occasionally a little bit of texture gel on the rocks.
Sometimes I extract the colours of the sea and textures of beach or waves and paint an abstract horizontal striped painting. “ Sea Colours”
I am inspired by the translucency of the shallow water on the rocks by the path where I walk and the way the colours change as it gets deeper from a very difficult colour to get, sort of olive green brown becoming greener and then gradually the blue reflections of the sky picks up on the waves making it greener and bluer till you get sometimes a very bright sea green/blue sea and sometimes a grey green, always different. I have seen the sea almost black before an impending heavy shower.
“Rocky Shore”
Having painted portraits and then architecture and landscape I find seascape the most challenging, interesting, and offering the basis for emotional variations of colour and composition providing an endless possibility for creativity. “ Beach Colours” 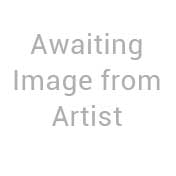