Grayson Perry’s The Tomb of the Unknown Craftsman, currently running at the British Museum, brings together some of Perry’s work – including new pieces which were created for this event – and the works of unknown craftsmen and women, drawn from the museum’s own collection.  The Chelmsford-born artist, winner of the Turner Prize in 2003, is known for – amongst other things – his complex pottery pieces, his transvestism, and the sometimes graphically violent nature of his subject matter.  In playing the role of curator, he’s had an opportunity to trawl through the museum’s sizeable collection over a two year period, looking for items which inspired him, pieces which he loved, and which he invites the audience to view through his lens.  In this way it’s a personal collection, and about the work that he wants to make in the future as well as the kind of thing that’s influenced him in the past.

For an artist best known for ceramics, and who’s talked about the humility of pottery, there is a lofty aim to this installation – fuelled by a desire to see his own “culture” (from his own “civilisation” – an idea taken from his last big show) displayed with work from ancient civilisations; that of the Ancient Greeks & Egyptians, amongst others.

In a recent piece for The Guardian he describes what he calls the “hubris” of this idea, drawing attention to what he portrays as the faintly ridiculous notion of putting his work alongside that of these great historical cultures.  Whether you think it ridiculous or not, it’s an intriguing proposition, and one which has resulted in an exhibition which is fairly unusual for the British Museum.

But Perry’s work focuses on the strange, the unusually juxtaposed, and so it makes a good fit – it’s a “memorial to […] anonymous skilled individuals” presented by the celebrity artist.  Perry’s chosen works range from an Egyptian drawing board (complete with incomplete 3500 year old sketches) to a Hello Kitty towel.  Also on display is a 250,000 year old hand axe: the first tool.  It’s part ethnography, part contemporary art.  It’s a trip into the afterlife, exploring ideas of pilgrimage and reverence, and it’s about the power that we confer upon objects as well as the notion of the museum as repository of knowledge and history, about the audience’s trip to the museum as a kind of pilgrimage in itself.

It’s clear from his writing on the subject that Perry is aware of what an enormous privilege it’s been to have been granted such access to the collection, and there’s an evident respect for those that work to preserve and display these objects, which is itself quite endearing.  The finished collection includes 170 pieces from the British Museum, and 30 of Perry’s own, including the Rosetta Vase. 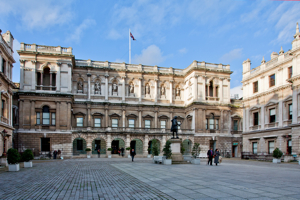 June – Across the UK in Art Exhibitions